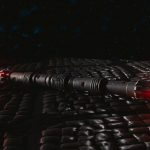 If you know me, you know I’ve never been a fan of Star Wars. I didn’t grow up on the films and I’ve always found sci-fi to be incredibly boring. At the same time, I’m also one to give things a chance.

After watching ‘The Mandalorian’ with my family over the holidays and seeing ‘The Rise of Skywalker’ with Nic, Big J and Ian, I found myself left with nothing but questions and curiosity.  That’s when I stumbled upon the full timeline of Star Wars films and decided it was finally time to watch them all in order. So, I did just that.

Here’s a few takeaways I jotted down in my phone while watching each one:

Episode I – The Phantom Menace

Episode II – Attack of the Clones

Episode III – Revenge of the Sith

Episode V – The Empire Strikes Back

Episode VI – Return of the Jedi

The Rise of Skywalker

Well, my friends. This was definitely something I never expected to do, but here we are. Will I now call myself a true fan of Star Wars? No, but I appreciate the films and those who love them the same way I love the 90s and rock music. Do I still think Star Wars is mostly unexpected ancestry revelations with lightsabers, like a series of Jerry Springer episodes placed in a galaxy far, far away? Sort of, but at least I now have a greater appreciation and understanding of the phenomenon. May the force…

Disclaimer: These are just my thoughts and opinions. Everything stated here is meant in a fun, lighthearted nature. I still love you.