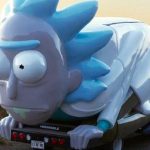 I was spouting off on my weekend show, as I tend to do, about how I had discovered the meaning of life. It started as kind of a riff, but the more I thought about it the last few days, the more I think I was right. (File under: Radio blowhard feels he doesn’t get enough credit for something) But, hang with me here.

My theory: The meaning of life is to leave the world in a better place than how we found it.

It makes sense, right? And we can do this is so many ways – not just hippie granola environment stuff. But, do our part to fill the world with better PEOPLE. For folks like me, who throw away their soda cans because I saw an episode of Penn & Teller about recycling once, that means doing right by our kids.

I bring this up because my 10 year old and I are going to take a father-son trip on Monday.

We are going to Captain Comics in Boise so that my kid can see the Rickmobile in person and take some pictures. You see – the Rickmobile is a fun way to promote the Adult Swim cartoon Rick and Morty, a fantastic, hilarious and irreverent cartoon about a brilliant, alcoholic scientist and his not-so-brilliant grandson as they jump from one dimension to the next on adventures. I absolutely love this show, and so does my son.

Here’s the issue. Rick and Morty is incredibly inappropriate for a 10 year old. This is not up for debate.

Cursing, violence, blurred out nudity – it’s no holds barred entertainment, folks. But my kid, LOVES IT. You have never heard someone laugh louder than Jax does when they bleep out one of Rick’s swear words. It’s the funniest thing he’s ever heard. So, how do I deal with it without being a total hypocrite because I watch the show?

We talk about it. We have conversations about how it’s just a TV show and the words he hears are not to be repeated because they are rude. We discuss that the weird sci-fi violence in the show is just a cartoon and in real life, these things are not okay. And he gets it.

Very good, honest and fun people would never let their kid watch a show like this. I understand.

But…I do. I’m not incredibly proud of it, mind you. But I do.

Back to my original point — If I believe the meaning of life is to leave the world in a better place, that means making sure my son is the best person he can be. Doing things with him — together. We have great conversations, he knows that I love him every day, he knows that I am proud of him every day and he knows that as long as he tries his best and gives it his all, that’s all I care about. He knows the difference between right and wrong and he’s probably the most polite kid you’ll ever meet.

And…yes, he also watches Rick and Morty every single night, and laughs his butt off.

I’m sure I’ll get a few weird looks bringing my 10 year old to the Rickmobile on Monday. That’s ok. We’ve been dealing with that for a while.

Here’s what those that may judge don’t know:  the smile on Jax’s face when I break out my impression of Rick and Morty and how happy that makes him. He loves it. That’s good enough for me.

My son and I are going to do something really cool together that he is gonna remember for a while. When he gets older, I hope he appreciates that and does the same with his kids. If so, then I’ve left the world in a teeny bit of a better place.  All because of Rick and Morty.

But this is my blog.