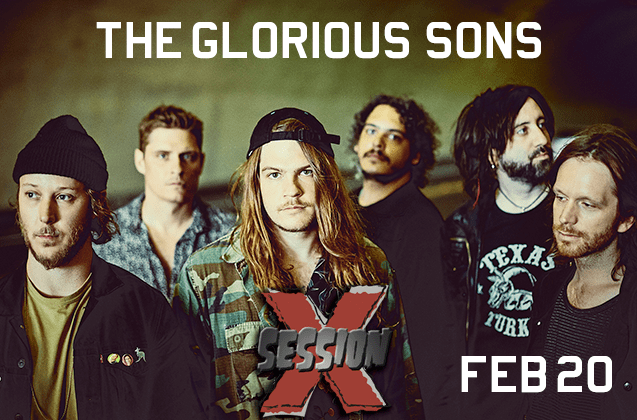 The Glorious Sons were right in the thick of a wild and triumphant arena tour when they realized it was time to record their next album.

“There was an energy surrounding the band at that point that I’d never experienced before,” says frontman Brett Emmons. “We felt this mania, almost like we were invincible or something. I didn’t know if it was healthy, but I did know that we needed to capitalize on it and carry that momentum straight back into the studio with us.”

The resulting record, ‘A War On Everything,’ is The Glorious Sons’ most exhilarating release yet, a taut, timeless blast of rock and roll that marries confident swagger with penetrating insight and reckless abandon. Produced by Frederik Thaae (Kate Nash, Atlas Genius) and recorded in the band’s hometown of Kingston, Ontario, the album is both reflective and raucous, meditating on materialism and meaning in the modern age as it grapples with love and loneliness, purpose and perseverance, anxiety and alienation. The arrangements are suitably eclectic and wide-ranging to match, hinting at the classics while forging a distinctly 21st century sound that veers from explosive, radio-ready bombast one moment to tender, fingerpicked intimacy the next, always with just a hint of danger and darkness lurking right beneath the surface. Broad as its sonic palette is, ‘A War On Everything’ still manages to retain a deliberate sense of cohesion throughout, a feat accomplished in no small part thanks to The Glorious Sons’ unwavering commitment to grit, guts, and honesty in everything they do.

“Even though we’ve been playing bigger stages lately, we had no interest in glossing things up or trying to make a slick arena rock album,” explains Emmons, who wrote much of the new record on the road. “In fact, our approach was just the opposite. We went into the studio with the intention of trimming the fat whenever possible.”

To say The Glorious Sons have been playing bigger stages these past few years is a serious understatement. Since the release of their 2015 debut, ‘The Union,’ the band has shared bills in North America and Europe with everyone from The Rolling Stones and The Struts to Greta Van Fleet and Twenty-One Pilots. Their headline shows, meanwhile, have grown at a breakneck pace, with the six-piece graduating from clubs and halls to arenas and stadiums on the back of their breakout 2017 sophomore album, ‘Young Beauties and Fools,’ which racked up more than 40 million streams on Spotify, scored the band their first Billboard #1 in the US, and nabbed them the prestigious Juno Award for Best Rock Album in their native Canada.

Recording ‘A War On Everything’ at home in Kingston allowed Emmons and his bandmates — guitarists Chris Koster and Jay Emmons (Brett’s brother), drummer Adam Paquette, bassist Chris Huot, and keyboardist Josh Hewson — to take their time and broaden their approach to

recording, working slowly and deliberately over the course of a month. Where ‘Young Beauties and Fools’ was all about leaving space for vocals, ‘A War On Everything’ invites the music do more of the talking, and the record’s deftly intertwined guitar parts and explosive rhythm section provide much of the weight behind its potent emotional punch. The band also opened up the studio doors to friends and family for the first time, which resulted in a constantly rotating cast of characters popping in and out to offer support and encouragement.

“Even though we were working fourteen hour days sometimes, the whole thing felt like a month-long party,” says Emmons. “At one point we had thirty of our family and friends all singing gang vocals on a track. It just created this invigorating, communal vibe that we’d never experienced in the studio before.”