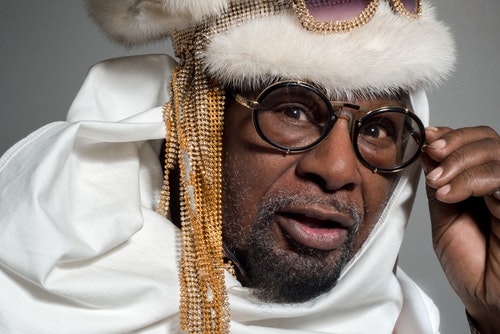 plus Miss Velvet and the Blue Wolf and special guests.

Recording both as Parliament and Funkadelic, George Clinton revolutionized R&B

during the ’70s, twisting soul music into funk by adding influences from several late-’60s

The Parliament/Funkadelicmachine ruled black music during the ’70s, capturing over 40

Born in Kannapolis, NC, on July 22, 1941, Clinton became interested in doo wop while

living in New Jersey during the early ’50s. . Basing his group on Frankie Lymon & the

Teenagers, Clinton formed The Parliaments in 1955, rehearsing in the back room of a

Plainfield barbershop where he straightened hair. The Parliaments released only two

singles during the next ten years, but frequent trips to Detroit during the mid-’60s –

On February 16th, 2012 George Clinton added to his list of accomplishments a

Honorary Doctorate of Music from the renowed Berklee College of Music.

TICKETS AVAILABLE AT WWW.TICKETFLY.COM OR THE RECORD EXCHANGE