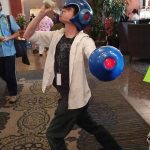 July 13th-15th the Boise area will be exposed to one of the larger comic conventions the states have to offer, I speak about none other than Wizard World Comic Con. A chance to get a picture with the likes of William Shatner or Ron Pearlman, while others are fiending for a chance to meet a vast majority of the Star Trek: The Next Generation cast. Most convention goers have flooded the hallways of local conventions like Anime Oasis, Tomodachi Fest, and Fandemonium, but Wizard World could end up being a whole different experience, for veteran con goers, to the aptly named, noobs.

I spent a vast majority of my teens working conventions or even volunteering for a badge. At one point I even started working for a traveling company that specialized in events and panels, just to get my convention fix. From Idaho to Ohio- I’ve seen my fair share of convention sites and the events and panels that come with the territory.

For some, a convention can be a bit overwhelming. What does one even “do” at a con? What panels should I be a part of? What in the actual eff is with the costumes? All valid questions, with pretty basic answers, so long as you know what you’re doing. So, I felt the need to bestow a bit of nerd-knowledge on those less informed, but also a guideline and friendly reminder for even the most seasoned of con goers. Some of these may seem to fall under the “DUH!” category, then again, you underestimate the value of some of these tips, and just how easy it is to forget some of these points when you’re three days in, about 12 energy drinks, and 6 hours total sleep.
So, as Mario once said, “Lets’a Go!”

DO- Meet new people.
I’m going to use the term “we” a lot. I feel like it’s the most fitting term for the village that is convention lifestyles. Everyone is there to enjoy the glorious nerdom before us, so chances are if you see someone in a rad shirt, or even a crazy awesome costume and you give them a “Hey, I like that.” It will be met with a “Thank you, I’m so-and-so.” The conventions are filled with people just looking to have a good time, and maybe catch their celebrity of choice “Out in the wild” and while some people may look intimidating- they’re mushy nerds on the inside.

DO NOT- Touch, Feel, Grab.
I’m talking about “Cosplay is not consent.” Usually people will be more than happy to snap a photo with you, however this does NOT give you permission to hug said individual, touch their personal belongings, and this especially DOES NOT give you permission to put your hands where they do not belong. Recently there has been a slew of harassment claims from not only con goers, but the guests that one might meet while out and about. Act like a decent human being, ask permission during photo ops if you’re looking to do something wacky, and be aware of your own body while cruising the convention floor. There is no worse feeling than bumping into someone and shattering an object they made, or just bought, because your head is trained on something else happening.

DO- Take breaks.
If you run yourself ragged the first day, day two and three are going to be miserable. I cannot tell you how many times I have gone balls to the wall within the first twenty-four hours, and spent the following twenty-four in a hotel room asking myself what the hell I was thinking. A con is a party, if you take six shots and black out- you miss everything. Stay hydrated. Know your limits. You have plenty of time to see and do just about everything.

DON’T- Spend all your money day one.
This kind of falls under the last point, but you’d be shocked just how quickly all those autographs and photo ops will stack up. Then you head into the “Dealers Room” where merchandise for your favorite fandom will little the walls- and just how fast you’re spending your childs college fund on a build to scale Phaser signed by the Shat will become. Then you’re out of cash for food, water, parking, room fees, etc.
Make sure you have your essentials covered, then go ahead, but that $150 statue of Princess Zelda imported from Japan that you’ve been looking for since you were young.

DO- Look at the schedule. Plan your days.
There is going to be so many damn things going on. You’re going to want to be a part of it all. Truth be told, there is not enough time in a day, nor the ability to be in two places at once. You’ll probably miss something you wanted to be at, while being at another thing that, well, you wanted to be at. Panels are amazing, it’s a quick insight into what these celebrities are like outside of the working environment. Get involved- if you have questions, ask them. If you want to be a volunteer for a certain event, raise your hand. You paid to get in, get your money’s worth, however keep in mind, you’re going to miss out on one thing while enjoying another. Without a battle plan, you’ll be running around confused, upset, and not having the maximum amount of fun. Line up early, nothing worse than missing out because you stepped away to use the bathroom, yes- even planning your breaks is part of the convention life. (See DO #2)

DON’T- Rely on your phone.
You’re going to run out of battery at some point, so maybe keep the Pokemon GO to a minimum. Keep your apps clean and closed. There’s only so many wall outlets, and if I see you standing in the way to charge for a few more minutes, I’m just going to assume you’re not here for the convention, but rather your social media tags. Look up from your phone, zombie. The internet is going to have a million people on it. So it’s going to be pretty slow. And besides- can’t catch a sneak peak of Caitlyn Glass if you’re nose deep in Twitter.

DO- Take. A. Shower.
I know, I know- but this is a big one, especially for those who are going to be going multiple days. If you can smell yourself, so can everyone else, tenfold. Bring hand santizer, shaking hands is cool and all, but you never know what people have touched and how long it’s been since their last shower. It happens. I get it. We get it. But for the love of god, no one should be that guy who made Q vomit while taking a photo because they smelled like burnt hair wrapped in old bacon.

So there it is, some tips and tricks, life hacks, whatever you want to call it for your first Comic Con. There’s plenty more, and you can learn for yourself at Wizard World Comic Con the 13th-15th, or any of the other amazing local conventions throughout the year.
Any questions? Check the website, https://wizardworld.com/comiccon/boise- send them my way- Adam@Xrock.com