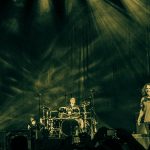 When I was growing up, my Dad always listened to a radio station called Pirate Radio (this becomes important later). At the time, my music collection consisted primarily of Beach Boys cassette tapes and a Michael Jackson CD. It was somewhere in the mid-90s when I started to dig through his albums – and it changed my life forever. That’s where I discovered bands like Pearl Jam and Stone Temple Pilots. From that point forward, I knew rock music was for me.

I would spend every summer mowing lawns for “music money.” Then I would ride my bike to The Record Exchange and spend all that money on rock albums (and spend another 30 minutes trying to rip the sticker off the CD). I can’t put into words the excitement that came from bringing an album home and flipping through the booklet while placing it into the stereo for the first time. Or when you turn on the radio and discover a new artist you never knew existed. That is the very moment when your relationship with a particular piece of music begins. As the character Penny Lane once said in the movie Almost Famous, “If you ever get lonely, you just go to the record store and visit your friends.” It’s true. Your relationship with music has most likely outlived the ups and downs of some of your friendships (and in my case, every romantic relationship ever).

Those who know me understand my deep love for music, specifically the 90s “grunge” era. There’s something special about the “Seattle sound” that has left a lasting impression on so many around the world. These musicians were real, raw and honest (and they used actual instruments). But as Robert Frost once wrote, “Nothing gold can stay.” We all remember the famous MTV News clips of Kurt Loder announcing Kurt Cobain’s death on April 5, 1994. Followed by a very similar occurrence on the same date in 2002 when Layne Staley of Alice in Chains passed away. Let’s not forget the great Andy Wood (former roommate of Chris Cornell) who left us in 1990. Without Mother Love Bone, my all-time favorite band would have be nonexistent (Pearl Jam in case you were wondering). While the Stone Temple Pilots were not a Seattle band, waking up to the news about Scott Weiland on a cold December morning in 2015 didn’t sting any less (I once had a dog named after him). And to add fuel to the already burning fire, now we mourn the loss of a true legend in Chris Cornell.
When these things happen, people may say, “I don’t understand why you are so upset over someone you’ve never met.” Clearly these people don’t have a true connection with music. And that bums me out because once you find it, you realize there is nothing else like it. Music is something you can relate to with almost any emotion. It has the ability to speak to you in ways nobody else can. Sometimes you can just throw on a song and it will take you back to a very specific moment in time. And for some, maybe music has even saved your life.

There is something oddly comforting about knowing the person at the other end of a song might be feeling the same way as you or going through a similar situation. When the words, riffs, and beats of your favorite songs have been with you for so many years and the person who created them dies, a part of you dies too.

But may their music live on forever.

P.S. Pirate Radio later became the station you now know as 100.3 The X. It’s safe to say that I may have never become a fan of the station or started a career in radio if it wasn’t for the discovery of each life-changing artist mentioned above. So for that and everything else they have done, I am forever thankful